A Spring Giant Boar Hunt on last snow of the year with 50 degree air temperature, you know spring is on its way. Wet and wild accurately describes spring hunting for Wild boar. Everywhere there is a constant drip as the long days of sun usher in a new beginning. 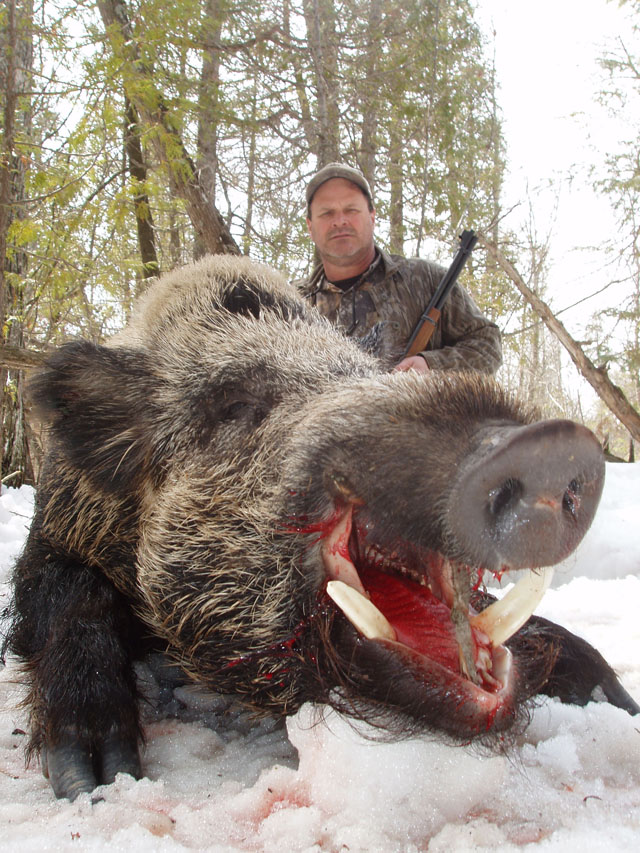 I was guiding a Wild Boar Hunt with Dick White and his good friend Greg Rich. Dick is experienced at hunting “wild hogs,” but this was his first time hunting a real Giant boar, one of the Big Beasts of the North.

He carried a lever action Winchester Model 1894. This caliber was developed over 100 years ago and has become a classic whitetail deer hunting rifle in the Northwoods. Light-weight and easy to carry, the Winchester .30-30 rifle has been the hunting weapon of choice in the thick forest  where a hunter can spend a whole day walking and never see another hunter. This short range hunting rifle has a long and distinguished history in Northern Michigan. But does the rifle have what it takes to bring down a Wild Boar?

The Giant Boar Hunt is On

Hunting Genuine Boar as a team, Dick and Greg were working  the hemlock forest on the east side of the estate. Catching a glimpse of a  “Dandy” herd boar  in the thick stuff, I motioned them in for a closer look. Sliding silently along a game trail we made our way through a maze of  boar trails until we reached a small clearing in the thick evergreen forest.

Silently we waited to see if the Big boar would enter the clearing. Dick knew to be ready as the beast was not far from us, and if the wild boar was bedded with a sow, there could be a violent showdown. This was his territory and he didn’t leave it often when the spring breeding was in the air.

The 30/30 was loaded with 180 grain round noses, a little on the light side for my taste but lever actions are quick to point and have plenty of fire power if you count all the rounds in the tube. Prior to entering the hunting grounds he had test fired his rifle off hand and aced the bulls-eye three shots in a row. No doubt about it, he was ready.

Gazing through the forest, I spotted blond hair underneath a dead-fall. As if he knew we saw him, the boar jumped from his bed and confronted us head on. Time was a luxury we didn’t have, but I stated to Dick that I was confident in him taking a head shot and that if he doesn’t go down to keep plugging him.

Dick let the first one loose.

Spinning, the boar was now running dead away. Dick’s gun was transforming into a semi auto, as he laid down four more shots. I confirmed two hits as the boar sprinted into the heavy brush.

Dick was cranked up, and it was all I could do to keep him from rushing into the heavy dense underbrush. The shots may have been a little back and having gathered our bearings we were holding tight, giving the boar time to lie down and  bleed out.

Playing over and over the action in our minds, the three of us kept trying to add up the facts and determine what all happened. Who saw what? Where was he hit? How many times? Where did you last see him? What way was he heading? 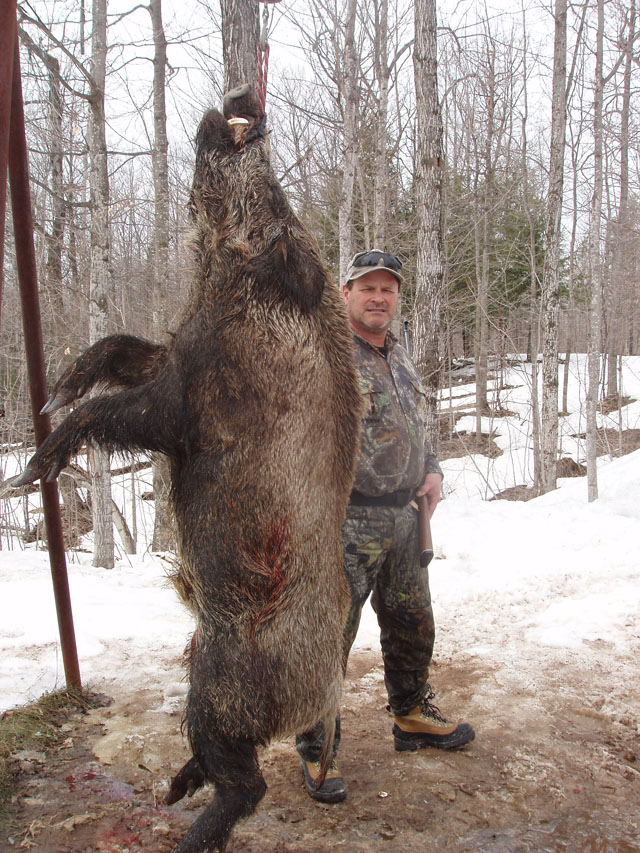 To Close for Comfort

Waiting a half hour we marshaled our forces and pressed on. Picking up the blood trail, I noted it was darker than I wanted, but it was definitely pumping out, so we pressed on.

Tracking boars in the hemlocks and cedars is a very nerve racking experience. You never know when or where a wounded boar is going to charge. Taking our time, we stopped every few yards to listen and glass for a boar tucked in a thicket or underneath a deadfall.

After 85 yards, and an hour of tracking, Dick spotted him 15 yards in front of us. There was a lot of down fall to shoot through and I motioned to Dick to finish him. The 30-30 Winchester echoed in the forest as Dick fired one into his shoulder. A direct hit but this wild boar wouldn’t stay down.

Next thing I knew he was barreling down on us and Dick was hammering two more shots into the beast. I could actually see them hitting one on either side of the head sending  bullets ripping through the length of the body. The boar crashed 71/2 feet from us.

High fives, and back slapping went on for about 10 minutes as the three of us stood over the magnificent beast. Upon inspection of the wild boar I found he had been hit 6 times. The boar had lived up to his reputation as one of the Beasts of the North.

Dick was speechless for some time. He never dreamed that the hunt would be so intense and the beast so strong willed. He had hunted wild hogs and had plenty of those stories, now he had survived the full fury of a Giant Boar, he has the greatest story to tell. 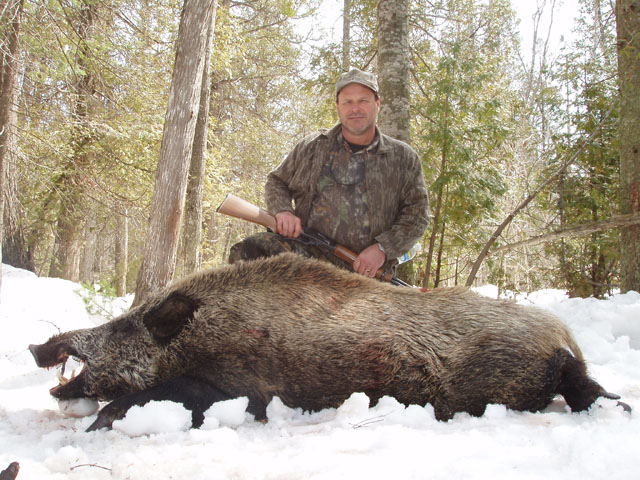 30-30 Win Proves to be an Adequate Rifle

Speed and accuracy is what saved us all from a serious encounter with the razor sharp cutters of the Wild Boar. Dick held the line. I am impressed with the speed Dick could fire his Winchester 30-30.    I don’t recommend hunting wild boar with a 30-30 Winchester, but this is your hunt and you choose your weapon of choice.

However, use 180 grain bullets. The 180s are low velocity, you don’t shoot a Winchester 30-30 for high velocity. With typical shots in the heavy timber being 50yards or less, I take bullet weight over velocity on a charging wild boar. You want stopping power.

Winchester ceased making the Winchester Model 1894 in 2006. Did we lose an American icon? The greatest Northwoods Sporting Rifle of all times? Production is over but the legacy lives on.

Now is the time to live your dreams and hunt an authentic Boar, don’t wait, time is running out as  world is changing and you don’t want to miss your next hunting adventure.